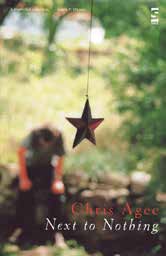 “Strong and real and thought-through … a masterful collection.”

“It is a profound and exceptionally moving book. I haven’t read anything so powerful for a long time. I was left with a sense of both the fragility and the huge importance of the here and now, as well as with an expanded sense of poetry’s capacity.”

“[It] is the most compelling book of poems I have read for years … a very significant, permanent tribute to Miriam, and representation of her. She joins the son who was Ben Jonson’s best piece of work.”

“Next to Nothing chronicles the years after the death of his four-year-old daughter, Miriam Aoife, in a series of episodic, technically perfect and pitch-reticent lyrics. For this poet, grief crashes upon the shore of language in three distinct waves: a series of brilliant couplets, a series of minimalist, impressionistic lyrics and a series of more discursive, muscular stanzas. The whole enterprise adds up to something beyond lyric poems … a work that breaks through the barriers of literature to become something more, a palliative journal, a chronicle of the heroism of lost parenthood, a handbook for the bereaved.”

“2009 has given us some terrific poetry, but the book I will remember most from this year is Chris Agee’s Next to Nothing. A profoundly personal response to the death of Agee’s four-year-old daughter in 2001, Agee’s sparse, careful, disciplined word-choices unite technical brilliance with emotional intensity; the work echoes with a sense of loss, but it is anything but Nothing. In fact, I think, Next to Nothing bears close comparison, in both subject matter and execution, to CS Lewis’s A Grief Observed.”

In his one statement on the collection, Agee has written:

In addition to individual poems and several sequences, Next to Nothing includes a section entitled “Heartscapes”, which consists of 59 ‘micro-poems’, as I call them. Many of these are extremely short; most were written during the very bleak and soul-sick year of 2003; and the whole section (with one poem per page) will take no more than thirty minutes to read, and indeed can be read with ease by any general intelligent reader, whatever their familiarity with or experience of poetry. Swiftness of effect was, in fact, part of the intention and fidelity; the challenge here as throughout the book was to record true and deep “heart-feeling” (as opposed to the “feeling” of sensibility, apperception, historical moment, etc.) – that most delicate of poetic material, owing to the swiftness of emotion itself. For once, I think I can say that these poems wrote themselves, in the sense of my being a quite passive amanuensis caught up in pain rather than any sort of instigator – drawing on the habit of technique belonging to what had become a previous life, whilst suddenly also bereft of belief in the poetic outcome compared to the apocalypse of the loss itself – that is to say, the textual as “next to nothing”, in several distinct senses, like Matisse’s sparest line-drawings in a sea of blank space …