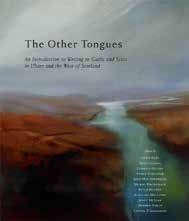 The Other Tongues:
An Introduction to Writing in Irish, Scots Gaelic and Scots in Ulster and Scotland
Irish Pages, 2013
Edited by Chris Agee
ISBN: 978-0-9561046-1-8
Purchase

Funded by generous Irish-British grants from the Arts Council of Northern Ireland, Foras na Gaeilge, the Ulster-Scots Agency and the Gaelic Books Council in Scotland, The Other Tongues is a beautifully produced, ground-breaking and major anthology in a coffee-table-book format, aimed at the general reader in English as well as in Irish, Scots Gaelic and Scots. With 79 texts spanning three centuries (evenly divided between each tongue: poems, prose extracts and songs), this colourful and educative anthology seeks to introduce the general reader to writing in the three minority tongues that coexist with the English language across the North Channel, in Scotland and the nine counties of Ulster.